As discussed in Part One of this article, correctly insulating pipe and mechanical equipment is critical because it prevents condensation on the outer surface of insulation systems. Part One of this series, which ran in the July 2012 issue of Insulation Outlook, discussed the influence of the design and climatic factors that affect condensation control. Part Two focuses more on the practical application of this knowledge, with a discussion of how to select the optimal design conditions and system components to reduce condensation in mechanical insulation systems. In addition, this article provides trouble-shooting advice to help you avoid some common mistakes related to achieving condensation control.

Of course, if energy efficiency is rated more highly, (a separate design criterion than condensation control) the selection of ambient temperature is of critical importance. 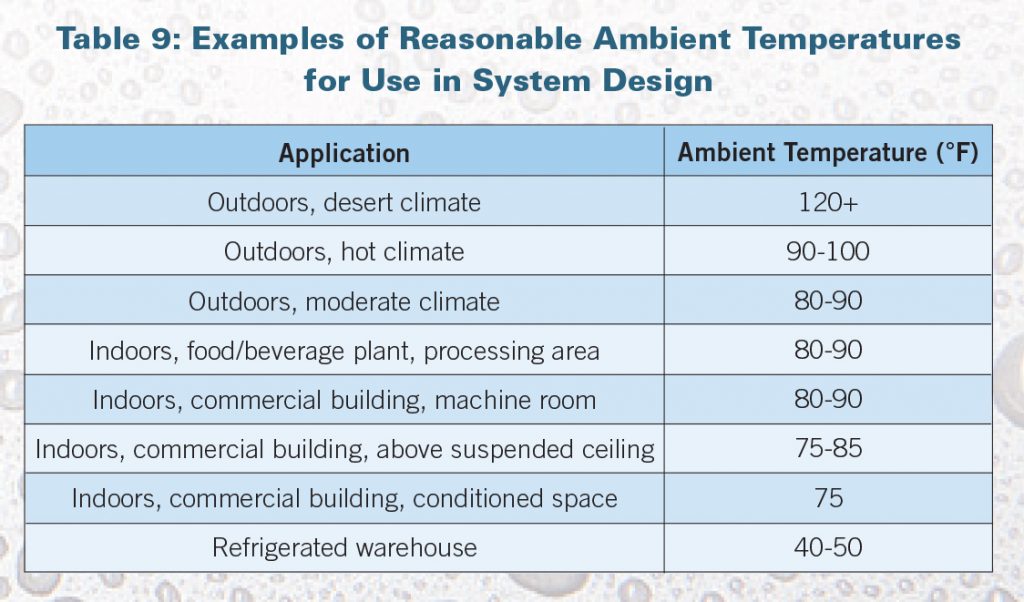 For indoor applications, it is usually best to select 0 mph (no wind) unless it is certain that forced ventilation will always be present to provide a wind speed above zero.

For outdoor applications, there are two approaches that can be used. A reference source for climatic information can be used, such as the ASHRAE Handbook of Fundamentals; an online database (e.g., weatherbase.com); or a computer program with weather data (e.g., WYEC2 and TMY2).  The problem with this approach is that it is not clear which type of wind speed value should be used. Should it be a yearly average, the highest speed recorded, some high percentile value (e.g., 99th), or something else? As an alternative, the industry standard 7 mph value can be used unless the system is known to be in a high or low wind location. Examples of locations where a higher wind speed may be appropriate include on or near the ocean shore, under bridges, and in mountain passes. An example of a location where a lower wind speed may be appropriate is a rooftop location, where the pipe is blocked from the prevailing winds by some solid structure. While it is certainly inaccurate to use a single 7 mph value as a rule of thumb for most locations, this approach does have the advantage of simplicity and is widely practiced.

Since the pipe size and orientation of any flat surface will be established by the needs of the facility, these factors cannot b

For most applications in North America, the jacket choices are straightforward. In outdoor locations, aluminum jacketing (Ɛ=0.1) is used for ultraviolet (UV) resistance and strength. For indoor locations, PVC jacketing (Ɛ=0.9) is used. However, there are exceptions to these general practices, when a different jacket type is dictated by conditions specific to the application. In an indoor environment where a great deal of physical abuse is likely, such as in a loading dock, aluminum jacketing (Ɛ=0.1) should be considered. It also might be prudent to use a greater thickness of aluminum jacketing to provide even more protection from physical abuse. In an indoor or outdoor environment where there will be either excessive exposure to corrosive chemicals or a need for an especially high resistance to fire, stainless steel jacketing (Ɛ=0.3) should be considered.

factors and has the largest influence on the necessary insulation thickness. The first step is to distinguish between indoor and outdoor locations.

For indoor locations, surface condensation on mechanical insulation systems can be a disaster, leading to demands that the contractor fix the system or even lawsuits. Surface condensation can drip on floors, causing slip hazards; drip onto manufactured goods, damaging them; drip onto food during processing or storage, contaminating it; and drip onto ceiling tiles, causing unsightly water stains. It can lead to mold growth on the surface of the vapor retarder, particularly when the outer surface of the vapor retarder is made of paper. It also can lead to mold growth inside the insulation system, especially when the insulation material offers little or no resistance to water absorption and water vapor permeability. Surface condensation can reduce the system’s insulating ability, which exacerbates the problem even further.

Indoors, surface condensation must be avoided 100% of the time. This is possible with a proper insulation system design, provided the indoor air is dehumidified and controlled at a relative humidity well below 100%.

Insulated pipe in indoor locations should be designed to prevent surface condensation at a very high relative humidity compared to what is likely in that area. Designing for an ambient relative humidity of 85% or higher is completely reasonable since it is necessary to prevent surface condensation 100% of the time indoors. Designing for such a high ambient relative humidity usually has less impact on the required insulation thickness indoors because of the high emittance of the jacketing (usually 0.9), a typically smaller pipe size, and a usually more moderate pipe temperature—especially on chilled water lines in commercial buildings.

The key for insulated pipe in outdoor locations is to design the system to prevent surface condensation a reasonably high percentage of the time, but how should this be done? Here are several approaches to consider.

This is the trickiest approach (in this author’s opinion). The American Society of Heating, Refrigerating, and Air-Conditioning Engineers Handbook of Fundamentals, Chapter 14 contains climatic information on extreme conditions for numerous global locations. The tables in this chapter include the 0.4th percentile dew point and mean coincident dry bulb (MCDB) temperature. From this information and a psychrometric chart or program, the percent of relative humidity can be determined. However, field experience suggests that the conditions arising from this approach may not be harsh enough. As an example, consider the information in this chapter for Charlotte, NC. The 0.4th percentile dew point is 74°F with a MCDB temperature of 80.8°F. This yields a relative humidity of 80%. However, consider Figure 4, which shows the frequency distribution of outdoor relative humidity based on the typical meteorological year data for Charlotte.2 As the figure shows, the relative humidity is above 80% for a significant portion of the year (32.6%). Often, this approach seems to yield design conditions that are not strict enough and would allow surface condensation too frequently. 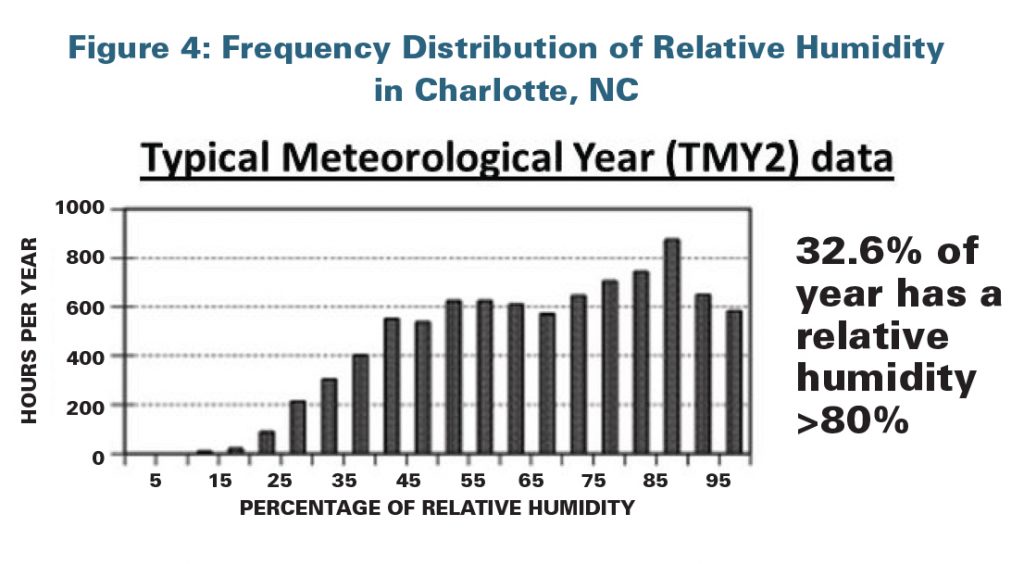 The approach of always using 90% relative humidity would probably yield acceptable results in commercial building chilled water applications, where the pipe temperature is seldom lower than 40°F. For colder temperature applications, and especially those at cryogenic temperatures like liquid oxygen ( 297°F), liquid nitrogen (-320°F), liquid natural gas (LNG) ( 265°F), and even extremely cold ammonia refrigeration lines at -40 to -60°F, the use of 90% relative humidity yields a requirement for an insulation thickness to prevent surface condensation that is often considered impractical. Instead, the system designer would design to a lower relative humidity, accept the consequence of more frequent surface condensation, and design other aspects of the insulation system to prevent damage from the surface condensation.

Unless there are detailed, specific reasons to use a higher or lower relative humidity, use a value in the range of 80 to 90%. Within this recommended range, select a specific value based on knowledge of the climate at the job location and the pipe temperature. At warmer pipe temperatures, including chilled water in the 35 to 45°F range, it is reasonable to use 90% relative humidity. At colder pipe temperatures, use the lower design relative humidity values in the range (80 to 85%) to determine the required insulation thickness. Once you have selected the thickness, evaluate it to see if it is impractical. If it is too thick, take steps to reduce the required insulation thickness. This could mean using a higher emittance jacket, such as painted metal instead of bare metal, or it could mean designing to a lower relative humidity with commensurate changes to other aspects of the system design, such as vapor retarder permeance and quality, to prevent system damage from the more frequent surface condensation.

Surface condensation on insulation systems for cold mechanical equipment (pipes, tanks, vessels, etc.) is a simple concept. Surface condensation will occur if the surface temperature of the insulation system is less than the dew point temperature of the surrounding air. The concept is made complicated because each of these two temperatures is dependent on the interrelationship of a myriad of factors, as shown in Figure 5.

All of these factors must be fully and properly considered and selected to ensure optimum control of insulation system surface condensation—commonly called condensation control.

Of these factors, the selection of the proper relative humidity to use for system design is the most important and the most complicated to handle.

One last, but very important, point to emphasize is that for outdoor applications, surface condensation cannot be prevented 100% of the time.

NOTE: This article is based on Jim Young’s presentation at the NIA 57th Annual Convention. He also will present this information at the Refrigerating Engineers and Technicians Association (RETA) 2012 National Conference & Heavy Equipment Show November 6-9, 2012. Information on the show can be found at www.reta.com/convention/2012/index.html. © Copyright 2011 ITW Insulation Systems.

Condensation Control not a Matter of Chance

Effective condensation control is not a matter of chance, it takes planning, communication and cooperation among all parties.