The Next Code Cycle

The next commercial energy code cycle for most states is the International Energy Conservation Code (IECC) 2015 code and ASHRAE 90.1-2013 alternative path. For some states, the new code has already gone into effect as of January 1, 2017, but the exact timing of implementation depends on each state. Remember that each state is in a code cycle, which lasts 2 to 3 years or more. Theoretically, your state could switch in the next few months or in a few years. Check the status of your state energy code at energycodes.gov.

Before we cover which states have adopted the latest code cycle, let’s briefly review some energy code basics. 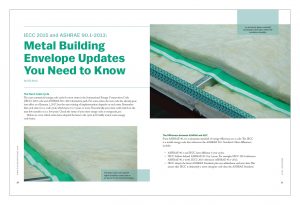 First, ASHRAE 90.1 is a minimum standard of energy efficiency, not a code. The IECC is a model energy code that references the ASHRAE 90.1 Standard. Other differences include: 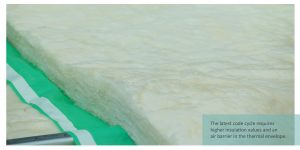 What’s in an Energy Code?

This article focuses on changes to roof and wall assembly code requirements, but remember that there are updates to other elements of the building envelope that you should also be aware of. 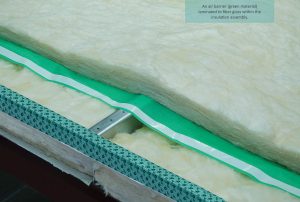 Which States Have Made the Jump?

The following states have adopted the newer energy codes:

The new code cycle will be effective in Georgia on January 1, 2018.

First, it’s important to know that I base the most recent code cycle changes on comparisons of the IECC 2012 code and the ASHRAE 90.1-2010 Standard. If your state’s current code is based on the older IECC 2009 and ASHRAE 90.1-2007 Standard, you will see more significant envelope changes. Several states currently at the IECC 2009 code are bypassing IECC 2012 altogether and adopting IECC 2015. This is a large jump, and many metal building contractors will feel the pressure. If you haven’t used filled cavity systems such as liner systems or long tab banded systems in the past, you will be required to start using them.

The choices are the same for the rest of the envelope. The building designer will have to make the decision to pursue either IECC 2015 or ASHRAE 90.1-2013. Once that decision is made, the entire building, including the envelope and mechanical systems and lighting, must follow the same path.

In a banded liner system, large panels of fabric or other vapor retarder material is supported by banding, and installed underneath the purlins. Multiple layers of unfaced and/or faced (air barrier) metal building insulation is installed on top of the supporting fabric and banding filling the cavity. The purlins are covered by the fabric vapor retarder in a banded liner system (Figure 1). 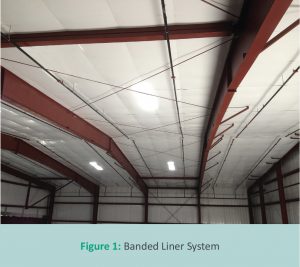 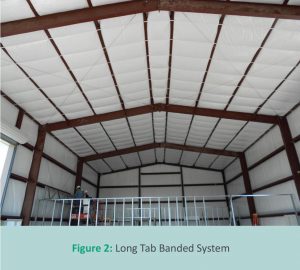 There are some major changes to envelope performance in the latest code cycle. In previous versions of the IECC code and ASHRAE 90.1 Standard, it was easier to obtain lower
insulation values in the roof and walls of metal buildings. The IECC 2015 and ASHRAE 90.1-2013 have the most stringent envelope requirements based on “Conditioned Space” and “Non-residential Space.” The only option that allows minimal insulation is Semi-Heated Space within ASHRAE 90.1-2013. Following are descriptions of the characteristics
of different types of building spaces:

Table 3.2, which is used to determine Semi-heated Space, has not changed with the latest code updates.

If Semi-heated is not allowed based on the heating system output, then each climate zone has major insulation requirement increases under the non-residential space. This is based on the ASHRAE 90.1-2013 Standard; the IECC 2015 code has, for the most part, the same values. For example, using ASHRAE 90.1-2013, climate zone 5a requires a roof U-value of 0.037 and a wall U-value of 0.050. In order to obtain these U-values, a metal building would require either a liner system or long tab banded system for the roof and for the walls.

IECC defines an air barrier as materials assembled and joined together to provide a barrier to air leakage through the building envelope. An air barrier may be a single material or a combination of materials.

Both IECC 2015 and ASHRAE 90.1-2013 require buildings to have an air barrier in the thermal envelope, and to be indicated in drawings. The air barrier is also a checklist item on a COMcheck™ report (COMcheck is an online tool that can help builders with code compliance). The first mention of air barriers was actually in IECC codes in the mid-2000s.

Buildings are now required to have an air barrier, and it must be located within the building’s thermal envelope. It can be placed on the interior side, exterior side, somewhere within assemblies composing the envelope, or any combination thereof. Materials with an air permeability not greater than 0.0040 cfm/ft² when subjected to a pressure differential of 0.3 water gauge are deemed to comply with this requirement. In IECC 2015, this can be found in section C 402.5.1 and C 402.5.1.1 (air barriers are not required in buildings in climate zone 2B). In ASHRAE 90.1-2013, this can be found in sections 5.4.3, 5.4.3.1.1, and 5.4.3.1.2. Exceptions include semi-heated buildings in climate zones 1–6.

As the future of code cycles change, the air barrier requirement will only increase in terms of required performance. This is a good thing for the metal building industry, as new requirements propel new innovations.

This article was published in the September 2017 issue of Insulation Outlook magazine. Copyright © 2017 National Insulation Association. All rights reserved. The contents of this website and Insulation Outlook magazine may not be reproduced in any means, in whole or in part, without the prior written permission of the publisher and NIA. Any unauthorized duplication is strictly prohibited and would violate NIA’s copyright and may violate other copyright agreements that NIA has with authors and partners. Contact publisher@insulation.org to reprint or reproduce this content.

This warehouse uses a 2-layer filled cavity (FC) system consisting of a first layer of fiber glass laminated to the vapor barrier that is installed from the top between the purlins supported by banding attached to the bottom flange of the purlin. The second layer is unfaced and installed over and perpendicular to the purlins with the thermal block above the purlin.

Metal buildings make up more than half of all low-rise, non-residential construction throughout the United States. There are different options for installing insulation in metal buildings, one of which is laminated metal building insulation, which is specifically designed to meet the unique thermal and acoustical requirements of today’s metal
buildings. When using laminated fiber glass, it is important to choose National Insulation Association (NIA) Certified Faced Insulation to guarantee that the stated R-Value of the product can be achieved.

Background For many years, metal building insulation was considered condensation control. From the 1960s through the 1990s, there were few performance requirements for insulation and a lack of cost-effective solutions for constructing buildings with high insulation values. Metal buildings were sold and marketed as low-cost structures that could be constructed quickly; energy efficiency was not