Paul Balmert is a graduate of Cornell University’s School of Industrial and Labor Relations, and his career in chemical manufacturing spans 30 years. In 2000, Mr. Balmert formed Balmert Consulting (www.balmert.com), a consulting practice that is principally focused on improving operations execution, including improving the management effectiveness in leading and managing safety performance. Mr. Balmert is the author of the best-selling book Alive and Well at the End of the Day; The Supervisor’s Guide to Managing Safety in Operations. He can be reached at pdbalmert@balmert.com.

Leaders the world over face the same tough safety challenges that stand in the way of 0 injuries. These challenges begin with attitude and awareness; change, communication, and compliance; and risk and training. If everyone is going to go home alive and well at the end of every day, these challenges need to be met head on, managed, and solved—at least to the extent they can ever be solved. 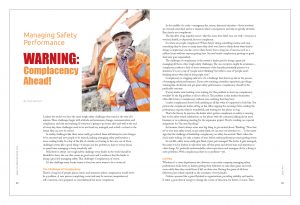 In reality, challenges like these never really get solved; there will always be new changes to be executed and new people to be trained, making managing safety performance a never-ending battle. In a day of the life of a leader, not having to face any one of those challenges seems like a good thing—it means one less problem to have to worry about, or spend time managing to keep everybody safe.

The Challenge of Complacency

There’s a long list of people, places, times, and situations where complacency would never be a problem. A new person completing a new task may be nervous, inexperienced, self-conscious, over-prepared, or overwhelmed, but never complacent.

In the middle of a crisis—emergency, fire, rescue, abnormal situation—those involved are stressed, stretched, and in a situation where consequences and risk are greatly elevated.

But, they’re not complacent.

The day after a big, negative event—like the crises that didn’t turn out well—everyone is worried, fearful, or depressed, but not complacent.

So, when are people complacent? When they’re doing something routine and easy, something they’ve done so many times they don’t even have to think about what they’re doing. Complacency can also occur when there’s been a long run of success, such as a million hours without anyone getting hurt. Success breeds complacency, proving no good deed ever goes unpunished.

The challenge of complacency is the reward a leader gets for doing a great job managing all those other tough safety challenges. The one exception might be awareness—complacency reflects a lack of acute awareness of the hazards potentially present in a situation. It’s not a case of “people aren’t thinking” but rather a case of “people aren’t thinking about what they’re doing right now.”

Complacency is a lagging indicator: it’s a challenge that shows up late in the process of managing safety performance. If you solve training, normalize operations, get things running like clockwork, and get great safety performance, complacency should be the predicable outcome.

If every leader were looking, even waiting, for this problem to show up, complacency wouldn’t be the big problem it all too often is. The problem is that leaders themselves often fall victim to complacency without even realizing that they have.

Leader complacency doesn’t look anything at all like what it’s supposed to look like. You picture the complacent leader, sitting in the office, sipping the morning’s latte, reading the performance reports, (they’re wonderful), and waiting for the phone to ring.

That’s the theory. In practice, the leader who’s gotten complacent on safety is running late to the safety award celebration; on the phone with the customer, talking about more business; or in a planning meeting for the expansion project. They’re working on a special assignment for “the next big thing.”

In business, there’s always some next big thing to get excited about. Thinking, “Now that we’ve won that safety award or got safety fixed, we can turn our attention to…” is the surest sign that the challenge of leadership complacency on safety has arrived. That’s when the clock starts ticking: it’s only a matter of time before safety performance starts getting worse.

In real life, safety never really gets fixed, it just gets managed. The better it gets managed, the easier it is for leaders to take their eyes off that prize and devote time and attention to other things. It’s perfectly understandable: what supervisors and managers do for a living is solve problems. With complacency, there is no problem—yet.

Whether it’s a crew, department, site, division, or an entire company, managing safety performance boils down to leaders getting their followers to raise their game and work more safely than they would have if left on their own. Raising the game of all those followers puts culture squarely in the crosshairs of every leader.

Culture operates like a giant flywheel in organizations, providing stability and inertia. It takes a great deal of energy to change the course of direction, for better or worse. That’s why every leader who tries to change the culture always has to overcome resistance (“I don’t want to do it that way”) and habit (“That’s not the way we’ve always done it.”)

If the culture change effort is actually successful, the function of the flywheel becomes positive. The safety culture becomes an attractor rather than a detractor; things that don’t match the culture—unsafe behavior and equipment, to name 2—are quickly singled out and corrected: “That’s not the way we do things around here.”

That’s the point at which the flywheel provides the energy to maintain the culture. Businesses that achieve this are said to have an “interdependent safety culture.” This reflects the idea that performance is great because everyone is taking active ownership of safety.

While we may know how this culture looks, the question remains as to how we can achieve that culture and how it can be maintained. The answers are obvious, and they suggest the problem that cultural flywheel can mask: the leader’s complacency.

The flywheel of safety culture can keep things going in a good direction for a long time—even when management has moved on to the next big thing. However, simple inertia will not keep safety culture intact forever. Slowly, even imperceptibly, that positive energy will begin to dissipate.

In a perfect world, when complacency begins to show up in management, followers would lead their leaders: “Boss, you used to put a whole lot more pressure on us to work safely. You used to be a lot tougher on us. You used to ask a lot more tough questions. You used to check up on us. You used to hold us accountable. If you don’t go back to doing that, one of us is going to go home hurt. None of us want to be that guy.”

If this occurred, those followers would be doing their leader a big favor—not to mention a big favor to themselves: going home alive and well at the end of the day is the whole point of managing safety. However, that’s not what tends to happen in the real world. Without the continuous investment of a leader’s energy in managing safety, performance will plateau.

It is important to note that workers must also stay vigilant in regard to safety. It is easy to become complacent and pay less attention to safeguards—both employees and management should work together to ensure safety remains a priority.

Once you start looking for it, complacency is pretty easy to spot. The problem is, complacent people don’t normally go looking for a problem. When everything is going well, they see no need to look for issues.

When things are going great, who thinks they need to pay attention to some problem that probably doesn’t even exist in the first place? It would take more than a bit of paranoia for a leader to be thinking, “It’s too quiet. Nobody’s worried. That worries me.”

When you pause and reflect—something very few busy leaders have time to do—on the potential problem of complacency, it’s not that hard to recognize its warning signs. There are behaviors—words and actions—that are clear indications of the onset of complacency. It’s even possible to create a measurement of its leading indicators.

Observe the behaviors and monitor the conversations that suggest people are getting complacent. For example, complacency is beginning to set in when people say things about safety processes and performance such as:

These words indicate a complacent attitude—if they are coming out of the mouths of employees, or even worse, a leader, then it is time to reevaluate safety culture and practices.

Then, there are actions; if complacency is beginning to creep into your workplace, you may observe the following:

Safety is never a “process under control,” because people are never under control. Safety performance can get better and it can get worse. The zeros that show up as measures at the bottom line—lost workdays, medical treatment cases, property damage—are dependent variables in the process. It takes a lot of effort over a long time for those numbers to get to zero.

Those dependent safety performance variables reflect the contribution made by key independent variables such as compliance, training, equipment condition and operation, and leadership. Those variables can begin to show signs of deterioration long before the dependent variables they control indicate any signs of a problem. Using a series of those metrics would be the simple means of constructing an early warning indicator of complacency.

The bottom line on the challenge of complacency: it’s always the last thing to show up in the process of managing safety performance. Knowing that, as safety performance gets better and better, complacency is the big thing every leader needs to be looking for and actively protecting against.

This article was published in the July 2017 issue of Insulation Outlook magazine. Copyright © 2017 National Insulation Association. All rights reserved. The contents of this website and Insulation Outlook magazine may not be reproduced in any means, in whole or in part, without the prior written permission of the publisher and NIA. Any unauthorized duplication is strictly prohibited and would violate NIA’s copyright and may violate other copyright agreements that NIA has with authors and partners. Contact publisher@insulation.org to reprint or reproduce this content.

When it comes to safety, every business leader wants exactly the same thing: for all team members to go home alive and well at the end of the day. The hard part is making that happen. In order to send everyone home safe every single day, every leader has to deal with a long list

In theory, managing safety performance should be easy. No leader ever wants to see any harm come to anyone working for them. Nobody working for a living wants to go home hurt—or hurting—at the end of the day. When it comes to safety—where the ultimate goal is to send everyone home alive and well—there’s perfect

A Serious Problem: In the last 10 years more than 28,000 insulation workers sustained injuries involving days away from work. Forty-six of them were injured fatally. While the number of injury cases has declined to slightly less than 2,000 per year, the number of days spent away from work, per case, has increased steadily. In