Laurie Cowin joined the Construction Dive team with a decade of experience in commercial and residential design and construction writing. She graduated from Ohio University with a B.S. in Journalism. She may be reached at lcowin@industrydive.com. 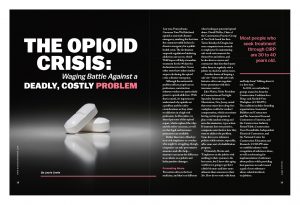 Although the nationwide problem affects people across professions, construction industry workers are particularly prone to opioid addiction. With that in mind, it’s important to understand why opioids are a problem and the safety considerations as they relate to addiction in a high-risk profession. In December, we shared part one of this opioid report, which explored the whys and the safety concerns, as well as what legal and insurance protections are available.

Rather than turn a blind eye to at-risk employees or a worker who might be struggling, though, companies can take preventative measures and offer help—measures can mean the difference in accidents on a jobsite and hefty punitive damages.

Prevention often is the best medicine, and that’s no different when looking at potential opioid abuse. David Pfeffer, Chair of the Construction Practice Group at New York-based law firm Tarter Krinsky & Drogin, has seen companies issue rewards to employees for maintaining safe work environments for themselves and others, and he also knows owners and contractors that hire third-party safety firms to regularly visit a jobsite to check for safety issues.

Another bonus of keeping a safe site—firms with safe work histories often can negotiate better premiums with their insurance carriers.

Jake Morin, Niche President of Construction at ProSight Specialty Insurance in Morristown, New Jersey, noted that some states have drug-free workplace credits for workers’ compensation, which necessitate having certain programs in place with random testing and non-discriminatory-type action. If someone does test positive, companies must look at how they want to address the problem. Some have zero-tolerance policies while unions, especially, offer some sort of rehabilitation program.

Ultimately, Morin said, “Employees on the jobsite with nothing in their systems is the best route, but I know this aging workforce is going to get hurt a little bit more and have more ailments than someone in their 20s. How do we work with them and help them? Talking about it is a first step.”

In 2012, several industry groups teamed to form the Construction Coalition for a Drug- and Alcohol-Free Workplace (CCDAFW). The coalition includes founding organizations Associated Builders and Contractors and The Associated General Contractors of America, and the Construction Industry Round Table, Construction Users Roundtable, Independent Electrical Contractors, and the National Center for Construction Education and Research. CCDAFW aims to establish industry-wide recognition of substance abuse, as well as advocating for implementation of substance abuse policies while providing best practices to work toward a goal of zero substance-abuse-related incidents on jobsites.

More than 5,100 companies and organizations—including general contractors, subcontractors, trade associations, insurance companies, regulatory/government agencies and employee representatives, and unions—have pledged their support to eliminating substance abuse. The pledge states “that my company will take reasonable action to create and maintain a workplace free from substance abuse. My company will work to increase awareness of the dangers of substance abuse within our workplace and throughout the construction industry.”

The Occupational Safety and Health Administration (OSHA) has formal national standards for scaffolding and crane safety, but Morin thinks OSHA should also be involved in establishing national standards as they pertain to misuse of substances. Because companies work across state lines, the lawyer said, it’s important to have a federal standard in place rather than relying on state standards, which can vary.

Nevertheless, Pfeffer said it’s complicated to implement testing plans because of the sheer volume of individuals from myriad companies coming onto sites. “Some employers do have random testing, but they have not proven to be very useful at diminishing abuses on construction projects over the years,” he said. “It would be practically impossible to have a testing program where workers are coming in and being tested regularly. I don’t think that will fly well with owners who want their buildings done quickly or with the construction workers.”

There are many treatment options available for opioid addicts. One specifically for laborers is from the British Columbia, Canada-based Construction Industry Rehabilitation Plan (CIRP), which was founded in the mid-1980s in response to the drug and alcohol crisis of the period. Although Executive Director Vicky Waldron wasn’t in Canada during that time, she said the construction industry in North America faces similar addiction issues today—mainly, a lack of resources.

“People were looking for help or treatment, and there wasn’t anywhere to send them,” she said.

That’s where CIRP came in. It began as a 12-step program, and Waldron evolved it to worldwide mental health industry standards so that today CIRP works within a harm-reduction framework. Services include individual counseling, as well as an outpatient day program, a residential program, a family program, and a telehealth program, which includes Skype, online support, telephone counseling, and text and instant messaging support.

Waldron emphasized the family program’s importance. “We don’t want to get a person clean only to put them back into a family that might have a lot of dysfunction,” she said. “You want to make sure you work not only with the individuals themselves, but with the family members as well to help them deal with the addiction and help them learn new ways of interacting with one another.”

CIRP began collecting data after Waldron realized there wasn’t a lot of information for the industry from the industry. Its inaugural report last July showed that nearly 83% of those addicted to substances who come through CIRP’s doors screen positive for moderate to severe underlying mental health issues.

More significant than that number, however, according to Waldron, is that most of those mental health problems are undiagnosed. About 90% of CIRP’s clients screen positive for a significant underlying early childhood trauma issue; about 70% of those also screen positive for moderate to severe post-traumatic stress disorder (PTSD).
“We have people that are really presenting with severe mental health and addiction issues,” she said.

Most people who seek treatment through CIRP are 30 to 40 years old. “That tells us we need to see people before they reach that age. For example, if we go in to talk to sheet metal workers, as part of the curriculum we talk about the correlation between mental health and addiction and do education and awareness training.”

Waldron attributes the growing crisis in part to contaminated fentanyl sweeping through the West Coast. “Fentanyl has completely changed the playing field,” she said. “Drugs are so contaminated at the source that we are seeing this huge spike and huge numbers of overdoses. As a result of that, demand for our services has more than doubled in the past year. That is directly related to the fentanyl crisis.”

Waldron has found employers and their staffs to be supportive of those who need help for substance abuse. “Nobody wants to lose a human life,” she said.

Although there is some concern that providing resources might be perceived as endorsing use, she said that the opposite is true—it saves lives.

“The mental health and addiction conversation needs to happen in the industry,” she said. “It’s a conversation that’s not always easy, especially when we have an industry that is so safety critical. It’s a very complicated conversation, but certainly we are starting to raise the topic. Employers have embraced training and that’s a very positive thing.”

This article was published in the January 2019 issue of Insulation Outlook magazine. Copyright © 2019 National Insulation Association. All rights reserved. The contents of this website and Insulation Outlook magazine may not be reproduced in any means, in whole or in part, without the prior written permission of the publisher and NIA. Any unauthorized duplication is strictly prohibited and would violate NIA’s copyright and may violate other copyright agreements that NIA has with authors and partners. Contact publisher@insulation.org to reprint or reproduce this content.

Drug overdoses claimed more than 64,000 American lives in 2016, which is nearly double the amount only a decade ago. Theories vary about the reasons behind the dramatic increase, although many attribute it to doctors prescribing opioid medications more frequently. Despite stagnant levels of reported patient pain, prescription opioid sales to pharmacies, hospitals, and doctors’

Legally Speaking: Employee Use of Marijuana

The increasing use of medicinal and recreational marijuana is creating significant challenges for public- and private-sector employers and their safety consultants. These issues are not going away—in fact, they are becoming more significant each day, as 23 states and the District of Columbia have now passed laws permitting individuals to use marijuana for medicinal purposes.

Even if marijuana is legal or becomes legal in your state, it does not mean that employees can use or possess it on the job, or come to work under the influence of it. Many employees are under the mistaken belief that if a state passed a law legalizing the use of marijuana, that an

The Occupational Safety and Health Administration (OSHA) is currently escalating its inspection efforts. If your company has not yet experienced an OSHA inspection, chances are it will sooner rather than later. While in certain cases inspections may be random, oftentimes an inspection can be initiated by a disgruntled employee, or by well-publicized accidents. It is